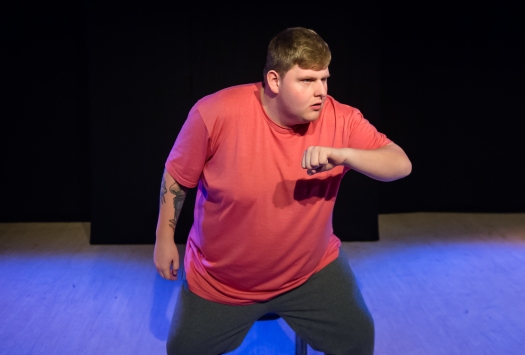 Up the winding stairs and passed the theatre offices of The Playhouse, there is a small dark space known only as The Studio. This cosy little corner of one of Liverpool’s oldest theatres has been transformed into the fictional world of Cartoonopolis. Written and performed by Lewis Bray, it tells the true story of his family’s struggle and joy raising Jack, Lewis’ autistic younger brother.

Cartoonopolis is Jack’s reality, a menacing cartoon underworld in which the likes of Tom, Jerry and Batman live alongside Jack’s own creations. Jack fulfils the role of a mild mannered mayor of the city, bullied by his nemesis, Mayor Sharp, a dastardly villain who is feared and hated by all who inhabit Cartoonopolis.

Lewis, in the role of his brother, does a wonderful job evoking a fantasy world in which cartoons live alongside human beings. It lends a Who Framed Roger Rabbit feel to the overall production, especially when the proceedings are interrupted by one of the other family members. Bev, a Peter Kay-esque portrayal of their mother, is a woman who loves and worries about Jack in equal measure. She spends her time researching autism online, reading books and tormenting herself over what might happen to Jack once he becomes a man. She threats about the decisions he will be unable to make and the support he will be given, or not given once parental responsibility is legally taken away. She is a kind and strong woman, a caricature lovingly portrayed by Lewis who obviously sees her as a hero.

The other accidental occupant of Cartoonopolis is Nige, the charmingly optimistic dad obsessed with ‘How to’ YouTube videos. Whilst Bev ponders the future, Nige takes each day as it comes, hoping for the best and ably dealing with the worst.

Lewis, if anything underplays his role in his family. We see him looking after his brother, making sure his sandwiches are always cut into eight, participating in adventures in Cartoonopolis and taking his brother to the hospital when he falls sick with suspected appendicitis. Lewis seems quiet compared to Jack, reserved in contrast to the unstoppable ball of energy that is Jack. It feels like Cartoonopolis is Lewis’ chance to see the world through his brother’s eyes, and have a damn good time while he’s doing it.

What Lewis Bray does with Cartoonopolis is quite an accomplishment, part stand up, part schizophrenic monologue, it is a feat of accomplished storytelling which isn’t seen often enough. Whilst always funny, it is consistently punctuated by the highs and lows of a life lived with someone diagnosed as autistic. This touching portrayal of his family thankfully never falls too far into sentimentalism, nor does it tip too far into the absurd. It feels a little overlong at 90 minutes, but the jokes are so genuinely laugh out loud funny that it’s barely noticeable. In comparison to the rest of the play, the confrontation with Mayor Sharp feels a little unsubtle. Still a well written moment but determined to make its point, it’s also a curious foray into Jack’s own insight into his condition and how it/s/he is viewed.

Cartoonopolis is a funny, well-written, touching and clever look at autism, mostly though it’s about family and the power of sticking together no matter what happens. The very worst thing about Cartoonopolis however, is its indecently short run in The Studio.

This article also featured in Liverpool Confidential on 11 February 2015