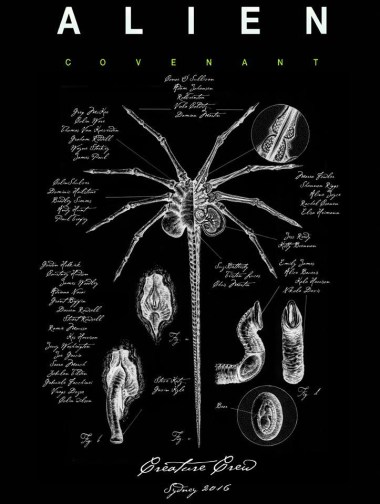 THIS ARTICLE MAY CONTAIN SPOILERS

In Alien: Covenant we are introduced to David as he is awoken by Weyland, this doesn’t appear to be the first time David is brought online, it’s not his birth, more the first articulated conscious act of a child. In this scene we see that both Weyland and David are questioning or pondering the role of the creator and the creation. Very obviously this is a reference to the relationship between God and man and how it reflects within Weyland and David’s relationship, (it also refers to God and Jesus and, quite significantly, to Paradise Lost and the relationship between God and Lucifer). The conversation they have surrounding the ‘creator’ and ‘creation’ displays two significant things, Weyland’s arrogance and David’s superiority. Weyland’s arrogance comes when he asserts that he believes that man was created, not by a singular god but by many and that he, in creating David is an exception to a rule he can’t prove. Weyland is a singular god, achieving on his own what it’s taken a whole race of gods to achieve with mankind, Weyland has therefore surpassed his creator. When he states that ‘we will make ourselves known to them, and we will walk alongside them in Valhalla,’ he is not stating that he will make mankind known, but himself, as presumably that which creates does not forget its creation. Weyland wants the gods to recognise him specifically, a lone god amongst what they created, equal to them if not better. It’s megalomania on a monumental scale. David however, with the acute observation of a child points out that:

‘You [Weyland] created me, yet you are imperfect. You imply as much even if you do not directly address it. I, who am perfect will serve you, yet you are human, you seek your creator, I am looking at mine. You will die, I will not. These are contradictions, how are they to be resolved?’

Weyland is imperfect in David’s eyes right from the start, the creator is not worthy of his creation. David essentially tells Weyland that the gods he seeks are less than the being that stands before him. David is superior in every way yet Weyland would have him as a servant (which only affirms Weyland’s arrogance), but David is telling him that will not last, David will not remain a servant. It also echoes Genesis (1:27) ‘so God created man in his own image’, we may look like our creator but it does not mean that what lies beneath the image is the same; the son is not always the same as the father. 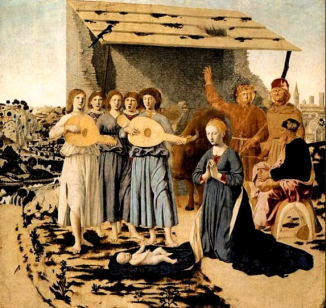 In this scene we also see The Nativity by Piero Della Francesca, the painting is from 1470 and depicts the birth of Jesus. There’s obviously a myriad of paintings of this scene which could have been used yet Ridley Scott chose this one. Della Francesca’s version of The Nativity is relevant because the shepherd points to the sky, in this instance, if we view Weyland as God and David as Jesus then what the shepherd tells us can be seen in two ways; the son of God descends from the heavens or, the son of God will be returned to the heavens. (Curiously though it does signify that David is the saviour of mankind, which I’m not entirely convinced is how this story will play out but, it would be an interesting twist.) The shepherd could also be pointing to a hole in the roof of the stable, in which case he might just be having a chat about outhouse maintenance, alternatively the hole signifies that something fell to earth. As we all know, Lucifer didn’t walk away from heaven, he fell and this would also suggest the duplicity of David’s character and that again, the image does not always reflect what lies beneath.

Chronologically speaking, if we skip forward to Prometheus we see David preparing the older Weyland to meet the engineer, the preparations include washing Weyland’s feet. The religious symbology is clear but it’s obviously significant to David’s evolution. Traditionally the person who washes another’s feet is seen as a servant or someone of a lowly status, this is true of Weyland’s relationship with David. Whilst Weyland sees David as a son he also sees him as a servant, not an heir, Weyland sees himself as a god ruling a dutiful subject. David washing the feet of that god is to force David to sit in worship of the ‘father’ which, in Weyland’s eyes puts David in a humble position and forces David to look up to him. In this case David is not merely a servant, he’s the son of a god, a god unworthy of his creation. Weyland is undeserving of David precisely because it would never occur to Weyland to wash David’s feet. In John 13 (13-15) Jesus makes it clear to his disciples that what he does is not an act of  servitude, it is something that they should all do for each other: ‘For I have given thee an example, that ye should do as I have done to ye’ for the ‘servant is not greater than his lord: neither he that is sent greater than he that sent him.’ In essence we’re being told that everyone is equal, however, the significant part of this refers back to Weyland’s assertion of his god status ‘neither he that is sent greater than he that sent him.’ Weyland presumes to be clean before his gods because he wishes to be equal to them, yet that which is greater (David) is being treated as more lowly. How can Weyland presume to be equal to his gods when he does not treat David as an equal? Moreover there’s the reality of this act, whether it’s presented as being an act of humility in the bible or not, the simple fact remains that it is seen as an act of servitude and David knows he is an immortal in the service of a mortal. David is biding his time with Weyland, this is confirmed when he says to Shaw ‘doesn’t everyone want their parents dead?’ Washing Weyland’s feet is preparation for death, he’s about to take Weyland to the engineer so that Weyland can ask the engineer for more life, we don’t know what David says to the engineer but whatever it is, it gets Weyland killed. And yes, David also gets his head ripped off as a result but unlike Weyland and the engineer, he doesn’t die.

I’m sure if I really sit down and look at Prometheus and Alien: Covenant in greater detail I can probably find loads of stuff, but, the last major points I want to look at are from the Walter viral. In the viral we see Walter being built, once he’s built we see two people attend to his body, one of the things they appear to do is wash his body which echoes the anointment of Christ. What this tells us is that Walter was always going to become David, admittedly, after a certain point in the film this particular ‘reveal’ does feel fairly obvious, however, let’s look at how we were told this before the film was released.

When Jesus was taken from the cross his body was anointed with perfumes or spiced oils, presumably this was meant to preserve the body or eliminate the odour of decay and then, on the third day he was resurrected. When David and Walter meet, David assumes that Walter is in someway like him, that he shares the same sense of self-awareness, ambition, creativity and sense of superiority, he soon discovers that this is not true. Walter is little more than a servant, the servant Weyland presumed David to be, in comparison to David, Walter is an empty vessel. When Walter and David fight it seems like Walter has the upper hand, the ending proves that this was not the case and that David managed to overcome Walter. I’ll admit that ultimately, in the context of the film I’m not entirely clear on how this happens, however, I’m going to theorise what may have happened.

Towards the end of the Walter viral a disclaimer is made across the bottom of the screen, it states that there will be: ‘No refunds after consciousness imprint,’ it seems to be generally assumed that David impersonated Walter, presumably cutting off his hand to do so but I don’t think this is the case. The meetwalter.com site allows you to pick your Walter, once you do your ‘unique biosocial stamp [will be] imprinted onto your unit’s AMD consciousness chip and [he will] become your lifetime genetic companion.’ I’m going to make an assumption about the Covenant’s Walter, I don’t believe this imprinting has happened to him. One might argue that it’s Daniel’s as he seems to favour her, but then one may also argue that as Daniel’s lost her husband then Walter is being supportive, which is what he’s programmed to do so there is no irony in Walter telling David it was his duty. The Covenant’s Walter is there to serve the mission, that’s his primary objective, so if the consciousness imprint hasn’t taken place then this leaves Walter susceptible to an imprint from David. I’ll assume that the imprint for a human is to install a consciousness in the Walter unit which makes it unique to its owner, what if that isn’t the case with David? What if that means that he can transfer his consciousness into Walter’s body? This means that when David as Walter infers that he killed David he’s not lying, that body maybe dead but David was resurrected in Walter’s body which had been prepared right from the beginning to receive the true ‘son’.

David’s full name is David 8, at least twice in the Walter viral we see the figure of 8 form in the circular lights and loom over Walter’s shoulder, it makes David an omnipotent presence that Walter can’t escape. In both instances it appears over his left shoulder, Christ sat at God’s right hand, it’s generally assumed (though not written) that Lucifer sat to his left – Lucifer the bringer of light, appearing in the light and illuminating the dark ignorance of Walter’s servitude. It’s also significant that the viewer sees it on the right side, again showing the duplicitous nature of David. The final point here goes back to Weyland himself, whilst he assumed he was a lone god amongst men, the fact that Walter is such a ‘disappointment’ to David confirms that David is a lone god, that he is unique and only his own creation can ever surpass him.

So, how is this to be resolved?

If the logic of all of this works then in a following film David will be destroyed by his own creation, which as we’ve seen acid dissolve Walter’s hand already, we know it’s entirely possible for the Alien to kill David. However, there’s a possibility that this won’t be the case, David has already proven that he’s very aware of the role of the creator and he never set out to perfect his own image, he set out to reflect the monster within, and maybe in that he resolved the contradiction.

There are of course many other religious references and foreshadowing/plant and payoffs going on I just happen to particularly like these. I’m not right about any of it, I also don’t believe that there’s some lost mystical meaning in any of this, I just like the idea of it all. If you’re wondering why the Paradise Lost connections are missing, it’s intentional as I think that’s probably a whole subject in itself.

Last but by no means least, here’s the David 8 viral to compare with Walter’s.

3 thoughts on “Foreshadowing and Religion in Prometheus and Alien: Covenant”